Showing posts from June, 2008
Show all

June 29, 2008
Thanks to all who came to the show on Saturday evening. The weather turned out to be perfect. There were a few lightning flashes from a storm just south of us but no rain. It was a small audience but still everyone enjoyed themselves. A big thanks to the first-timers to the show and the generous souls who donated to the Renegade Picture Show fund! Next show is JULY 19 and we're showing a shark movie. See you then.
Post a Comment
Read more

June 21, 2008
Next show is a classic western comedy movie on Saturday, June 28th at (where else?) Rocktown Climbing Gym. Show up early to get a good spot. Bring snacks and drinks. Bring a chair. And, if you have one, bring a huge soundsystem (preferably 800 watt JBLs). It's getting warmer outside so don't forget the bug spray!
Post a Comment
Read more 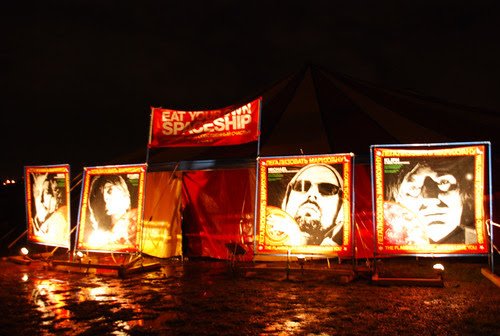 On Friday, June 13th the Flaming Lips teamed up with deadCenter Film Festival and Rocktown Climbing Gym to present the band's long-awaited film Christmas on Mars . The experience was unlike any I've ever encountered. The show took place in an enormous red and yellow circus tent with 200 seat capacity. This tent housed a large stand-up screen about 14 ft tall and 20 ft wide, a massive sound-system, futuristic green-glowing orbs, and a huge digital projector. Seating was arranged in rows like an auditorium using fold-out benches. Outside the main tent was a smaller tent which served as the ticket booth and popcorn stand. Movie tickets and popcorn were free. Beer was also served (for a cost) and this was handled by the deadCenter folks. The original plan to hold three shows, one at midnight, one at 2 am and one at 4 am, was changed after an Oklahoma storm rolled in. Tickets were handed out prior to the 10 pm slated time and the first show began about 11:30 pm as the tent was ope
1 comment
Read more

Christmas On Mars - TOMORROW AT MIDNIGHT 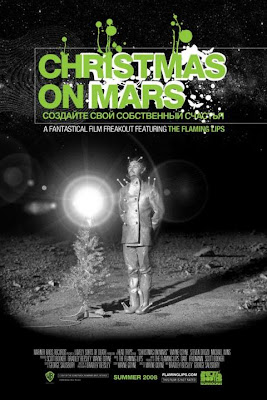 DETAILS, details, you want details. So here are some. There will be 3 shows total. The first on beginning at MIDNIGHT on Friday the 13th. The second one at 2:00 am on Saturday the 14th, and the third at 4:00 am. No kidding, 4:00 am. Ever been to a 4:00 am movie premiere? Me neither. Should be interesting, that is, if I make it through the night. TICKETS ARE FREE. That's right, FREE. Tickets will be handed out beginning at 10:00 pm on Friday evening. Not sure by who but I do know where - at Rocktown. Same location as the show. The show is for those age 18 and over. The show is taking place not on the Renegade Picture Show screen but in a HUGE circus tent that holds something like 200 people. Hence the number of tickets for each showing will be 200. One ticket will be handed out per person so if you want one you better show up. Tickets for the 2 am show will be handed out at midnight and tickets for the 4 am show will be handed out at 2 am. This show is a collaboration by Wayne Coyne
Post a Comment
Read more
More posts