Showing posts from 2009
Show all

October 22, 2009
We had a great turn-out for this event. This was our first gig that we required tickets for. That's because the film cost us money to show so we needed to charge at least to break even. In order to do so I devised a plan to have vendor booths/sponsors for the event. At one time it appeared we would have 5 vendors but it eventually backed to 3 vendors. All were paying to be at the show and display their wares. As the crowd was mostly climbers, it was after all, a climbing film festival, they were drawn to the outdoor gear-store sponsor, and the wine vendor, the most. Our t-shirt vendor did ok but I think they wished that they would have sold more shirts. In any case, the event went wonderfully - not a single technical issue. In fact, it was probably one of the smoothest running shows I've delivered. As for the climbing films - all were absolutely amazing and with the feedback I got, everyone was really happy they attended. So maybe we'll make it an annual event. **** O
Post a Comment
Read more 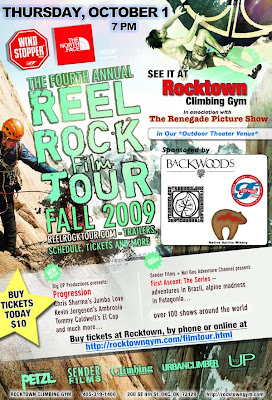 Hey, if you didn't hear yet, Renegade Picture Show has teamed up with Rocktown Climbing Gym to bring the Reel Rock Film Tour to Oklahoma City on Thursday, October 1 at 7 pm. Vendors/sponsors at the show include: Tree & Leaf Clothing, Forward Foods, Backwoods, and Native Roots Winery. This is an outdoor show (of course) so bring chairs, blankets, etc. There is a cost for this exclusive show - ticket are $10 and can be purchased day of the show. For more details go to http://rocktowngym.com/filmtour.html If you want some more info on what the Reel Rock Film Tour is, check this out .
Post a Comment
Read more

Guerilla Drive-Ins in the News

July 03, 2009
Things have been slow this season for the Renegade Picture Show but that doesn't mean that we're done. On the contrary, we have plans for more shows and are working on some new ideas. It's just been a matter of finding the time to do the next show. The "Projectionist" (i.e. Me) has been working on his own film in addition to everything else that life brings. Who knows, maybe the film *might* even make the Guerilla Drive-In circuit one day. So don't lose hope...we'll be back soon enough. In the meantime, I wanted to share some news with you about a recent drive-in start-up in the Northeast. They're dealing with some of the same stuff we've had to contend with - for those of you that know the history of RPS you know what I'm talking about. Here's a couple of recent stories on them... Fosters.com - Dover NH, Rochester NH, Portsmouth NH, Laconia NH, Sanford ME Fosters.com - Dover NH, Rochester NH, Portsmouth NH, Laconia NH, Sanford ME
Post a Comment
Read more 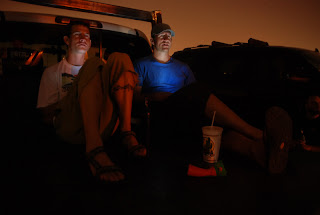 So the third season of Renegade Picture show has begun - this time with a "Dumb" (if not Dumber) movie. We had a GREAT turnout for the show and everyone had a great time. The weather was perfect - a great way to start the season. Sometimes I feel a little bad about turning down the music and starting the show because it interrupts the social atmosphere - everyone is moving about, chatting it up and just enjoying hanging out together. But once the pre-show footage gets going everyone seems to remember - ah, yes we are here for this - and they get comfortable and start to watch. Aside from a couple of technical glitches (i.e. losing power halfway through the show and having my laptop DVD player freeze-up at the VERY end of the film - that killed me by the way) everything went pretty well. I've realized I'm sort of a perfectionist when it comes to syncing everything together and making it appear seamless. I guess I have an expectation for that performance aspect of the
Post a Comment
Read more

April 20, 2009
The third season of Renegade Picture Show begins this Friday, April 24 at our favorite movie watching venue. For exclusive movie watching details and the viewing location you must register for " THE LIST ." We have lots of great movies planned for this year. This first one is a personal favorite - a comedy that can best be explained as "dumb." For those new to the show here's how it works: You show up. Bring stuff to eat, stuff to drink. Something to sit on (or in); a chair, a blanket, in your car. We'll roll some interesting clips and stuff we've put together and collected from various places. Then we'll play the feature. All this starts at dark - which is pretty much 9 pm. This show is free but we happily and graciously accept donations. Hope to see you all there for this first show.
Post a Comment
Read more