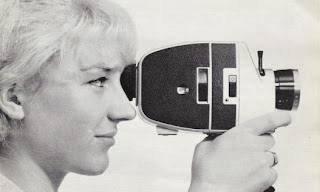 Our Super 8 film night last Saturday evening was great. We watched a total of 17 short films ranging in length from about 2 minutes to 20 minutes. The program was divided into two half with the first half consisting of a number of Super 8 films I've found online. After a brief intermission we screened the second half of the program which featured shorts from the 2010 Cambridge International Super 8 Film Festival. Overall the response was good and I think people really enjoyed most (if not all) of the films.

The next show - our 20th - will have to be a good one. I'm thinking about what to do. Ideas?
oklahoma city Renegade Picture Show rocktown climbing gym RPS 19 silo art space super 8 film

Return of the Renegade Picture Show

August 13, 2016
It's been some time and I've decided to re-launch the Renegade Picture Show in all its glory this August with RPS #24. Not sure what will be shown at this time or which Saturday evening it's going to be just yet so stay tuned.

I was updating the site today, clicking through the links on the links page and was pretty shocked to find that there are very few guerrilla drive-ins left in the US. I think this is a result of the pressures of the film industry's regulating body and licensing folks hard at work putting the hammer down - way to go Swank and Criterion.

"It's stealing," they say. (Do I want to get into the collective argument of copyright fair-use, right now? Kind of, but I'll sidestep for now.)

In any case, the popularity of outdoor movie showings has skyrocketed. Here in the OKC metro it seems like everyone has some sort of movie night. On the river, at the botanical gardens, at the waterpark, at the amusement park, at the community park....so …
Read more

October 18, 2013
Saturday, October 19th at 7pm will be show the Reel Rock 8 at Rocktown and presented by Backwoods. The tickets are $10 and may be purchased either online at backwoods.com or the day of the show.