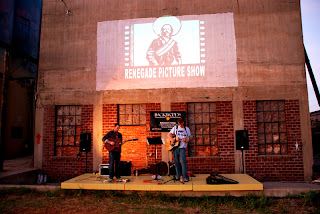 Last Saturday we hosted the 2011 Reel Rock Film Tour as our 20th Renegade Picture Show. Backwoods sponsored the event - which was really cool of them. It was held at Rocktown on the back of the building where there is a large white screen painted - same place that many other RPSs have been shown. In addition to the film there was a band before the show. This gave me the opportunity to have to build a stage. The band, Sanburke (I think they were called) did a great job. We had a sizable turnout for the show - not sure how many people but I would estimate it was on the order of 60-75. The weather was beautiful, the films were stellar, and overall it appeared that audience really enjoyed the experience. As far as the technical stuff, the sound was superb, the projector (the same one I've used for 5 years running) continues to beam big and bright without a hiccup, and the playing of the show was smooth. For future plans, I'm working on trying to pull-off some sort of Halloween spectacle - not sure what it will consist of yet - but I have a few more days to figure it out.
2011 Backwoods live band music reel rock film tour Renegade Picture Show rocktown climbing gym RPS stage